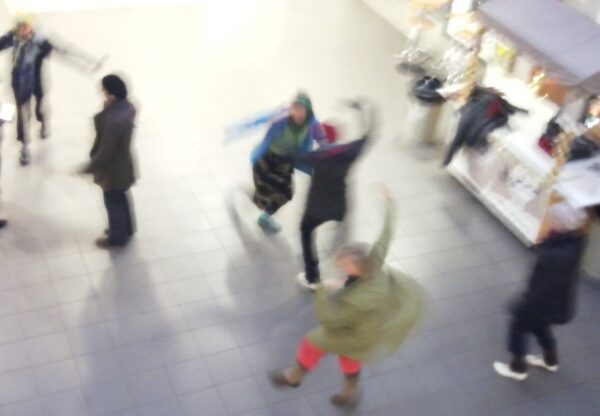 We invite you to a teatime ‘conversation’ through movement. For all of us who are exploring and appreciating links between Alexander work and poetic movement or dance.

In the first hour the hosts will propose a few simple ‘scores’ or structures for moving and witnessing each other. We will complete with a sharing and reflection time. Participants will be free to move as much or as little as they would like, no special skills necessary!

Raquel Cavalcanti is a Brazilian dancer, improviser, dance instructor, and AT teacher. In 1999, she graduated from the Matthews school (IRDEAT) in New York (USA). After living and working in NYC for over 15 years, she returned to Brazil to teach dance and the AT at the Federal University of Minas Gerais (UFMG) in a tenure-track position.
She is currently working on her PhD at State University of Campinas (UNICAMP) in Sao Paulo, Brazil, where she is investigating the possible relationships between AT principles, dance, and teaching in an inventive, non-traditional, and non-hierarchical way. In that sense, the works of Paulo Freire, Virginia Kastrup, bell hooks, and Jacques Rancière have been invaluable.
Raquel, the mother of two beautiful young women, loves baking long-fermented bread and taking care of her plants. It is her hope that Lula will be their next president this year.

Korina is on the Faculty at RADA (Royal Academy of Dramatic Art), London, teaching the Alexander Technique to trainee actors, and movement and devising on the Short Course program. She also teaches at the Institute of Contemporary Theatre, Brighton and has a private practice.
She graduated from the Nicholls’ Training School in 2001 and has been a member of STAT ever since. She has served on the STAT Research Group, The Performing Self team and is currently a member of the Alexander in Education Group and the ATLP (Alexander Technique Liberation Project)
She has roots in physical theatre and has always engaged in various forms of movement improvisation. She has an MA in Dance and Somatic Well-being which gave her initial training in Authentic Movement, did further training with Jane Bacon and went on to found a regular peer group practice.

Ainesh Madan (he/him) is a dance artist currently based in Bangalore, India. He is a co-founder of the 206 Dance Collective. Ainesh attended Bard College (USA) on a full-tuition scholarship, receiving a Bachelor of Arts in Dance and Economics. He has since choreographed numerous works, while also collaborating with, and/or performing for, various notable choreographers. Experimentation is foundational to Ainesh’s work. All his choreographic endeavours are distinct in form and content, and serve as reflections of his learnings at the time they were each created. Ainesh’s choreographic choices are informed by his daily attempts to enhance his capacities as a dancer; for him, choreography is a tool that highlights the potency of dance as a medium for honest, unfettered communication. He premiered his first evening-length solo, Phantasies, as part of the University Settlement Guest Artist Series programme in New York City, for which he received the Emergency Grant from the Foundation for Contemporary Arts. Ainesh was one of the 2021 residents for Goethe-Institut / Max Mueller Bhavan’s bangaloREsidency-Expanded at Weltkunstzimmer in Düsseldorf. He recently received the ThinkArts Grant to develop a new work for kids inspired by the character of Smeagol/ Gollum from the Lord of the Rings saga. Ainesh is currently working towards becoming a certified teacher in the Alexander Technique. He is also an experienced, multilingual dance teacher. Ainesh’s writing was published in Imagining – A Gibney Dance Journal in November, 2021. Given the opportunity, Ainesh would willingly spend all his time reading, journaling, meditating, playing an instrument, and most importantly, hanging out with his companion.