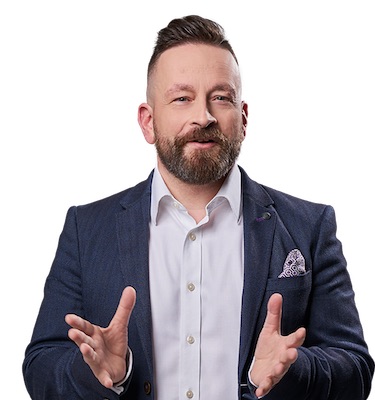 Trusted by the world\\\’s leading brands, Lee has a reputation for energetic audience engagement, thought-provoking content, and hilarious delivery. Lee\\\’s audiences learn to sell better, network better and communicate better – and they have fun while they\\\’\\\’re doing it!

Lee had his first Alexander lesson in 1991 and trained with Karen Wentworth 1997-2000 at The Alexander Technique Studio in London.

As an AT teacher, as well as a private practice, Lee has taught at several drama schools, The Actors\\\’ Centre in London and at several global organisations.

Lee was a professional magician for 20 years, is a member of the world-famous Magic Circle and was described by Prince William as ‘absolutely amazing’.

A lover of live theatre, Lee has written theatre works for The Almeida Theatre, and been a commissioned writer at The Royal Opera House. Fluent in Spanish, Lee is very good at playing the piano badly!

In a previous life, Lee was a sales director at News International, and he now combines this background in magic, theatre and sales to give presentations, keynotes, workshops and coaching to firms including Deloitte, Shell, Laing O\\\’Rourke, Roche, EY, Barclays Wealth and HSBC, helping people to become more persuasive and connected, sell more, present better and increase their ability to get their messages across confidently to colleagues and clients.

Over time, Lee was increasingly invited not just to perform magic to clients, but to speak at their events. Realising that this was his \\\’true niche\\\’, in 2010 he became a full-time conference speaker and workshop leader and since then has spoken all over the globe at hundreds of events.

He calls it his ‘first’ because he has four more planned in his head. Now, he just needs to find the time to write them…