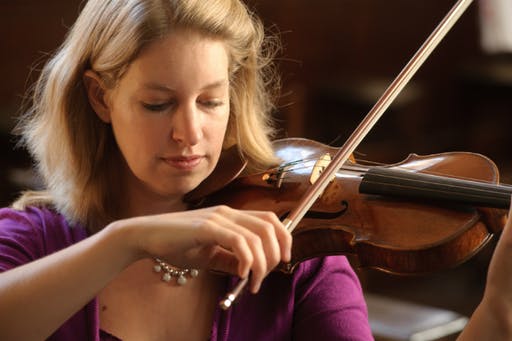 Esther Visser is a Dutch violinist, specialized in historically informed performance practice, PhD researcher and Alexander Technique teacher. Directly after gaining her Bachelor of Music Degree in the Netherlands she was invited to continue her studies with Vilmos Szabadi at the Franz Liszt Academy in Budapest, where she completed a 3 year Postgraduate program. Simultaneously, she followed a 2 year program ‘Formation Superieure’ with the Orchestre des Champs-Elysées in France. She was coached by the concertmaster of the orchestra, Alessandro Moccia, and performed at the ‘Spotlight on Young Artists’ concert series of the Festival de Saintes. She subsequently gained her Master of Music degree for baroque violin with Sigiswald Kuijken in Brussels.
Esther acted as a concertmaster at several orchestras and during two years she was leader in the European Philharmonic Orchestra. With modern violin she worked as a substitute a.o. at the Netherlands Chamber Orchestra and the Arnhem Philharmonic Orchestra. Esther performed as a soloist with orchestras in The Netherlands, Belgium, France and Finland. As a baroque violinist she collaborates in concerts and CD recordings a.o. with La Petite Bande, Collegium Musicum, Concerto d’ Amsterdam, Florilegium Musicum, Musica Aeterna, and the Harmonious Society of Tickle-Fiddle Gentlemen.
Esther is founder and artistic leader of ensemble La Chambre du Roi, winning the title ‘Promising Ensemble’ at the International Young Artist Presentation in Antwerp. She received prizes and study grants from the SNS REAAL Fonds, the Marti Keuning Eckhardt Stichting and the Ben Remkes Cultuurfonds. During 3 summers she participated at the Aspen Music festival, USA. Esther did practical artistic research on authentic performance practice of Romantic repertoire at Leuven University, winning the ‘Excellence Prize’ from the Roger Dillemans Foundation Belgium for this research.
Since 2013 Esther works as a guest lecturer at Codarts, Rotterdam Conservatory, as a specialist in historically informed performance practice, coaching Mmus students. Since 2017 Esther also works as a guest lecturer at the Royal Conservatoire in The Hague. Esther is running a successful Alexander Technique practice in Haarlem (NL) specialized in musicians. Since 2019 Esther is doing PhD research through the Canterbury Christ Church University (UK), researching the way how violinists supported their violin between 1790-1830 and the implications of that on performance practice and health.

Esther trained as an Alexander Technique teacher with Paul and Tessa in Amsterdam, from 2012-2015.